If you have lived in Worcester most of your life, then you have probably heard of at least one of the projects that Jay Graham has been involved in.  From his work in the late 90’s with the Arthur Dent Foundation (ADF) to more current work with Soulstice and the Sam James Band, he has been performing on the local scene for almost 20 years.

In the last 10 years he has stepped out as a solo artist playing various local venues performing a wide range of acoustic covers as well as original material.  He is a full time musician, teaching private guitar lessons during the day at Union Music in Worcester as well as at his home studio in Lunenburg and a performer by night, playing live music in various settings often averaging 75-100 performances per year. 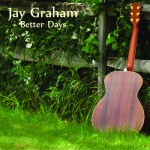 I am excited to announce that my first solo album is available for listening and digital download now at
http://jaygraham.bandcamp.com/releases.